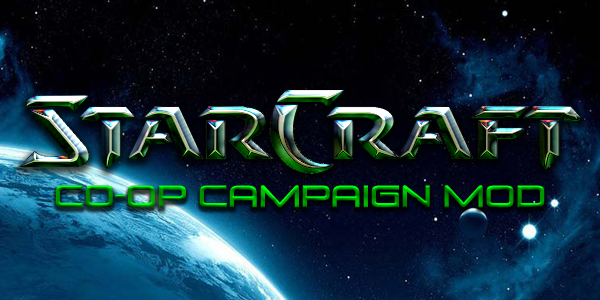 R4Z0R84 and I got fed up with the lack of good Co-op RTS games! So what did we do about it I hear you asking? Well, we decided to mod every level in StarCraft and it’s expantion (Brood War) to be 2 player Co-op! We have increased the difficulty somewhat to compensate for two people, changed the scripting and edited small parts of the map layouts where needed. Please enjoy and share this with everyone you know!

Below is a copy/paste of the old blog I was keeping at the time of this project.

Co-Optimus
has writen an post up about our mod! We hope everyone is enjoying it as much as we enjoyed making it.

kogetBW and Stardomtv have been live streaming this mod, it’s great to see how they overcome the challenges we have created!

R4Z0R84 has released an INSANE version of our Co-op campaigns and also one for single player! This release is untested and only has
the AI changed to the highest difficulty so no guarantees on it’s playability! You may die in 2 minutes or you may have an epic battle!

Today we have finally finished Brood War! As I type this it’s uploading to dropbox.

Now we will be moving on to another project in WarCraft 3, If you want to track the progress of that the link is up the top!

We have had a few articles written up about the mod! Check them out on Wired, Game Front and Segment Next

We have 5 Zerg levels completed so far and all of the rest except the bonus level are ready to be tested!

Due to people trying to play original StarCraft in Brood War we made it so if they do they can’t build Brood War units or get the upgrades.
Also the Protoss Campaign has had a difficulty adjustment and some minor bug fixes.

We are going to release the Brood War Zerg Campaign when it’s finished. At the moment we have 3 levels done and 2 of them have been tested.

Today I went over some of the original Terran missions making some changes and fixing/adding things.
It should be a bit harder now from level 5 up and level 8 has been given a more heavily scripted intro.

Brood War is now 2/3 done! It’s been a lot more work than original StarCraft but we have kept doing what we set out to do.
Tomorrow we will be starting on the Zerg levels and hope to have them up as quickly as we can!

Finally we have this map finished! It’s been tested to breaking point (quite literally) many times and now we are happy with it.
Terran 8 is hopefully not going to take too long so keep checking for updates!

We have finally finished our first Brood War campaign! Also we hope to have Terran finished by the end of the weekend.
It’s all going very smoothly, I hope people are enjoying it. Please leave feedback on Mod DB for us!

This level has been taking a bit longer, it’s by default got the maximum (255) locations already placed and over 200 triggers.
It’s finally ready for testing though so it hopefully will be up by the weekend!

R4Z0R84 has Protoss 7 up and 8 almost complete only requiring some final tests. Terran 8 looks like it should be easy enough.

Terran level 6 took quite a long time to do due to a far more complicated than it needed to be starting scene but it was flawless first test. Quite a challenge too!

Protoss level 6 looked simple at first but r4z0r84 stayed up untill 2am on a friday night fixing it! It just goes to show how dedicated to the cause of co-op gaming he is. It’s been tested and is up now

We also tested Terran level 5b and fixed a couple of small bugs we found. One player was getting failed at the end and a missile turret was placed in the way of the main CC’s addon location.

Most of the mid Terran levels in Brood War seem to love dropping you off at the start after a little opening scene.
It makes it a lot more work but it’s all very simple triggers so no problems yet. Terran 6 is coming along nicely!

Brood War is going well, Terran 2 took a couple of days but the others have been rather straight forward.
Terran 5a has some strange custom AI going on but I twisted it to work for me. It’s about 75% done so I’ll have it up tomorrow.
Terran 5b hopefully will be easier, I would like to have it done tomorrow too.

The trailer is up! I rolled out some minor bug fixes on the Terran and Zerg campaigns today too. The fixes consist of just unit placement and description fixes.

Brood War levels are slow to do, the complexity is much greater than the original levels so we will be doing single releases of the them at first.

If anyone wants to help with testing that would be great!

Work has started on Brood War! Some of the levels are looking to be 10x more scripted than the origial levels.
It’s going to take a while to complete but I’ll get some demo levels up hopefully within a week.

I’ll have the trailer up tomorrow if I can’t find the time tonight.

Today R4Z0R84 put this mod on Mod DB while I did some syncing, editing and rendering of videos that I’ll upload tonight.
Tomorrow I will hopefully finish working on a short trailer highlighting the best parts of our recorded testing.

I’ll be working on a trailer for this project over the next couple of days. Bug fixing is coming along nicely but testing everything
thoroughly is a lot of work. We have tested each map at least 1 time so far.

Tonight I’ll upload a youtube video as a sample of our work and throw it on this page!

On the 25th we finished off initial testing/fixing for the rest of the Zerg and Protoss campaigns! That’s not to say they are 100%
flawless yet but hopefully now they can be tested by others.

Today I worked on the remaining bugs and difficulty tuning in the early/mid terran levels so they should give everyone more of a challenge!

Zerg maps tested up to 8, we wiped twice on 8 due to dark templar escaping so we didn’t confirm the victory conditions work.
Level 9 was silly difficult so I have tweaked the AI scripts and will hopefully get some more testing done tomorrow.

Protoss 1-6 I believe are working so I have uploaded them. Enjoy!

We have the Terran and Zerg campaigns almost completed but still need to bug test some and tune AI difficulty levels on many.

I will be keeping this page up to date as we make changes. If you find any bugs please contact me on ModDB