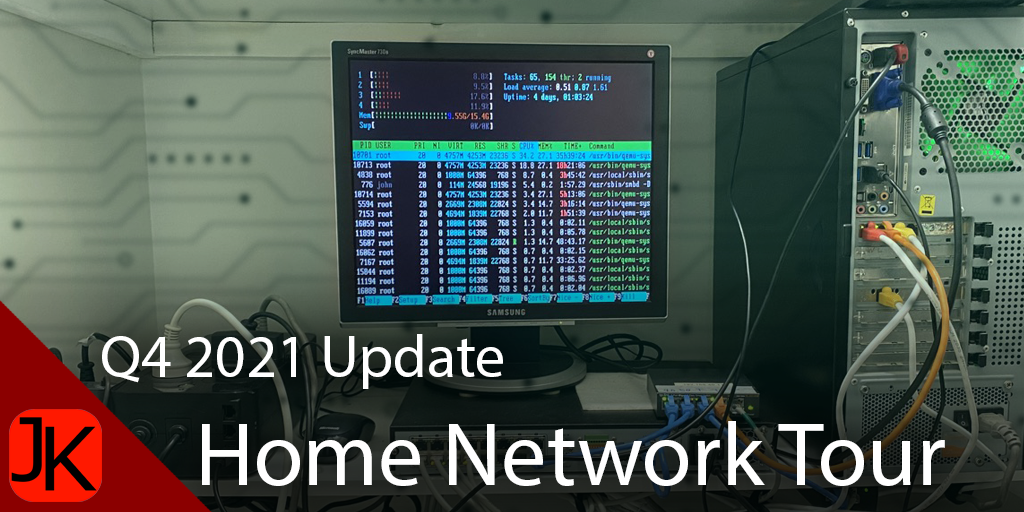 About three years ago I moved in to this house and at the time it had no ethernet through it at all, very much a blank slate for a home network. I started by running UTP cable to each bedroom and the lounge room. Some time later I installed security cameras around the house and wired these in as well. In 2020 I moved much of my server hardware in to what was the toilet room in this house. Obviously I am an android so I don’t need a toilet room right? No, I put a toilet in the bathroom directly when renovating it. The noise of the NVR, PoE switch (at the time) and Server itself in my office drove me to run a bunch of UTP cables to this small server room.

My home network spans across 3 houses and 2 sheds. I’ve done this for several reasons:

Here is a diagram of my whole network as of the making of this post. 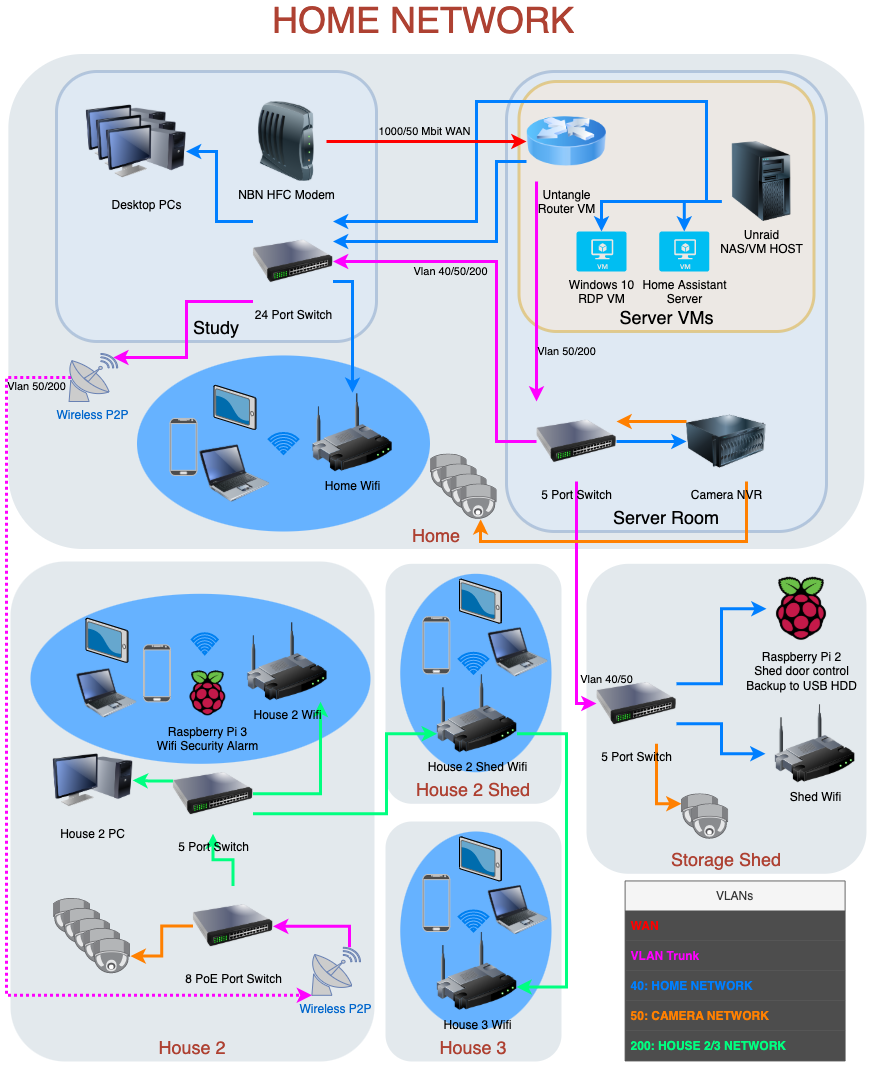 Also, I have my main switch here as well which distributes the network between PCs, rooms in the house, the Ubiquiti WAP and the Ubiquiti Wireless P2P link between houses. 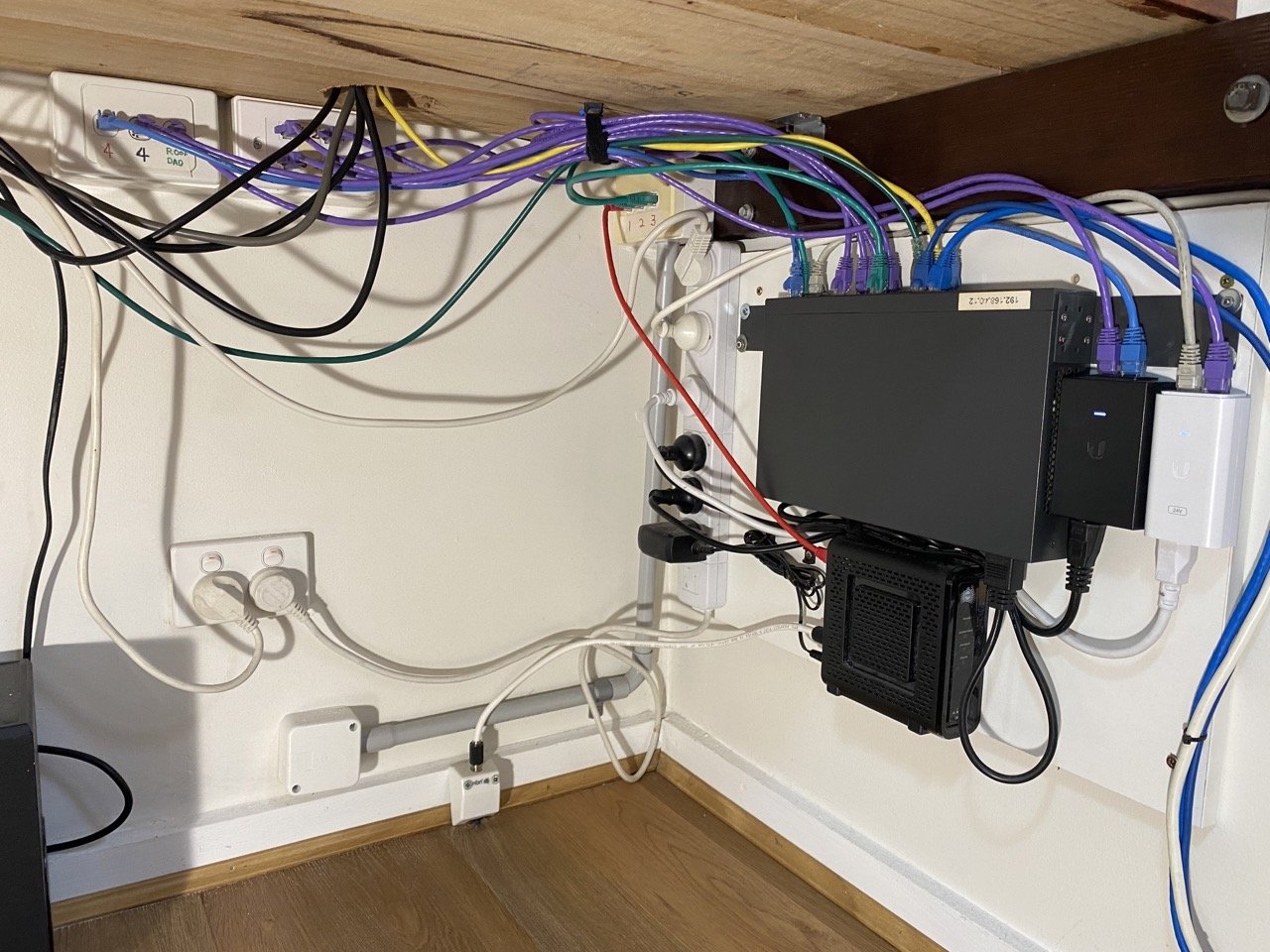 In here I have my Hikvision NVR recording security camera footage from 11 cameras. However I only have 4 cameras powered by the NVR PoE ports on my house, the other cameras are located in different places as you’ll see.

Also I have my Unraid server which also contains several VMs including Untangle as my main Router. I would love to run a hardware router but it’s hard to beat the power consumption of just another VM running. Unraid is running on an i5 4440 CPU with 16GB ram and a Asrock Z97M Pro 4 motherboard. I am using this NAS to store my PLEX library, all video and raw photos I’ve taken, projects I’ve worked on and much more data I’ve accumulated over the last two decades. As for what I have running on this server here is a list:

There is a little 5 port TP-Link smart switch which can handle VLANs and under the shelf there is a POE+ injector sending power to the switch and security cameras in the shed. On the left there is an Eaton S3 550 VA UPS which I got 5 years ago to power the NAS and Server in case of power outage.

In the Storage Shed I have two networks coming in on a VLAN trunk. The switch I am using here is pretty neat as it’s powered by PoE from the house. Also it has two ports on it which have PoE out and power both security cameras in the shed. I have a Wifi AP at the far end of the shed (blue cable on the switch). There is also a Raspberry Pi 2 hidden behind the HDD which controls the roller doors and acts as a backup server with an encrypted HDD and a powered (12v) USB-SATA adaptor. I do a nightly rsync to this HDD of my most important data.

House 2 is my father’s home. He has 5 security cameras around his house which record over a wireless P2P network to my NVR. This little switch only has 4 PoE ports so you can see a single PoE injector for the 5th camera. There is a WAP in his home and another in his shed. Unfortunately unless I want to re-run a lot of wire there is a fair bit of daisy chaining going on here! The built in switch in the WAP in his shed also connects to another house (house 3 on diagram) which belongs to another family member. 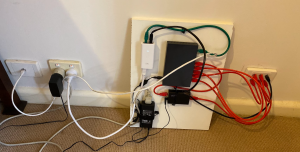 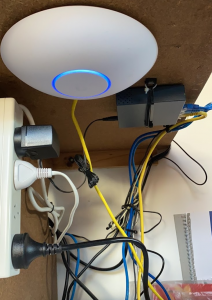 I don’t have fancy network monitoring setup. However what I do is have my Home Assistant ping a WAP in both houses to check connectivity every 5 minutes. This way if there is a break in the network I can get a notification directly on my phone. So far this has notified me of several power outages in the houses so it’s working great.

So how can this mess be improved? I do edit video occasionally and am feeling a choke from 1gbit links. Getting something faster, say 2.5gbit+ from the NAS to my Macbook would be ideal. Next year I’ll jump straight to 10gbit to my PCs as used SFP+ cards are cheap. The core switch in my study room would benefit from being upgraded to a 24 port 1gbit + 4x SFP+ 10gbit ports at this time.

Improving some of the WAPs in use would be a key improvement as well. Out of the total 5 WAPs, 2 are good Ubiquiti products. The rest are old used modem/router/wifi combo devices which are setup as WAP only. These don’t have great range and two of them don’t even support AC (N only)! Going full Ubiquiti UniFi line would be fantastic here.

Thanks for reading, I hope you get some good take away points from this and it inspires you to grow your home network and learn in the process.