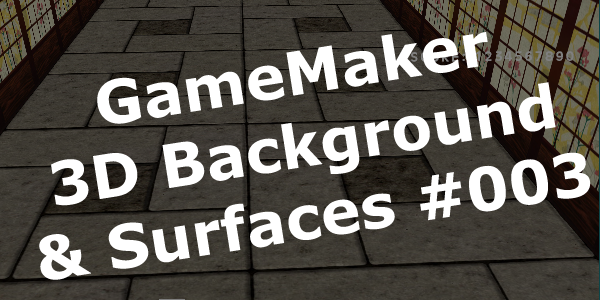 3D in GameMaker can be tricky to set up if you’re only reading the manual. In this tutorial I’ll show you how I use Surfaces and basic 3D functions to create a background for my shmup style game. If you’re new to GameMaker, make sure you have a good understanding of it’s interface and how to use GML first. 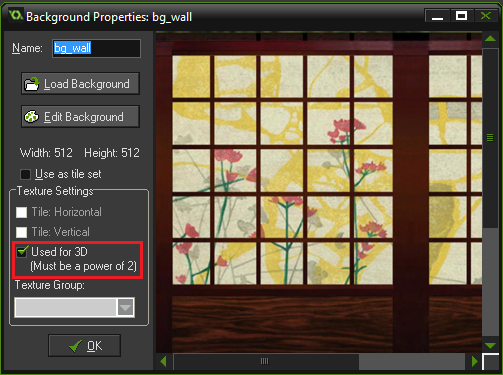 Create an object and give it a depth of 10,000. Give the object a Create Event and add this code:

I’ll give you a run down on what we’re doing in this code. surf_3d is going to be the surface. Because surfaces are volatile we’re defining it as nothing for now as we don’t need it until the draw event. w and h will be the width and height of the surface we’re drawing to. If you don’t want these to be the room_width and room_height then set them as you wish.

Ratio is the aspect ratio it’s going to render in. You want the surface width divided by the height in this variable. I’m using a narrow FOV (field of view) because of my play field is narrow but you may want to increase it. Replace the texture names with the names you’re using. I’ll be showing you how to do walls and also floors in this tutorial.

Now it’s time to give the object we’re working in a Draw Event with code. This is what I’m using but you’ll want to work out your own code below the comment “Draw Stuff in 3D”.

You guessed it, it’s run down time again.

The first task for the computer is checking if the surf_3d surface exists and if it doesn’t, it creates one with the width and height we’ve saved in w and h variables. This is why in the create event we set the surf_3d variable to equal noone. We need this code because surfaces are volatile and actions such as minimize the game will destroy the surface, causing a crash if the surface isn’t recreated. We then set the surface target to surf_3d so that we’re not drawing to the default application surface. The “draw_clear_alpha( c_black, 1 );” function clears the surface with opaque black. I don’t quite understand why but if I don’t put this in it just renders a black image.

While we’re using x, y, z to define where the camera is, we need to define another point for the camera to point towards. I’m using the variables xto, yto and zto for this. If you know how the “lengthdir_x” and “lengthdir_y” functions work, this isn’t too hard to decode the workings of.

“d3d_set_projection_ext” is the camera. We’ve got a lot of arguments on this function but most are self explanatory. The first 3 are x, y, z followed by xto, yto, zto and then we have xup, yup, zup. The last 3 determine what is “up” relative to the camera. Keeping this as 0, 0, 1 is best unless you want to work out how to roll the camera. Next we have “angle” (FOV), aspect (ratio), near clipping and finally far clipping distance. Near clipping is how close something has to be to the camera for it to clip inside and far clipping is draw distance.

I’ll cover “d3d_draw_wall” and “d3d_draw_floor” here as they are very similar to use. First is 6 position arguments, then the texture to use (we set it in the create event), horizontal repeat count and vertical repeat count. With the x, y and z positions you can imagine yourself looking down on the scene. The x and y are the same as 2D from that perspective and you just add z for how high you want. It’s tedious but really quite simple when you play around with it.

Ending 3D and Drawing the Surface

It’s time for “d3d_end();” to end the 3D drawing. We then need to reset the surface target, meaning it’ll be drawing to the default application surface again. The last line is drawing our image to the application surface. You can change the x and y if you have a boarder offset.

You can play with the x, y, z, direction and zdirection and see what they all do. If you want a forward moving camera, adding to the y and resetting it is useful. For example:

This code will move you forward and seamlessly knock the camera back if your background lines up just right (my example code will).

If this was your first time using 3D in GameMaker then I hope you’ve gained a good understanding of how to play around with it. GameMaker isn’t designed for high quality 3D scenes but with some trial and error you can certainly make nice backgrounds for 2D games.